Thorgills has now won a whopping 28 awards over the last six years!

In November 2018 we won the British Property Award for Best Estate Agency in Brentford, having won the same award for Best Letting Agency in Brentford just a few months earlier. These awards were judged through a series of mystery shopper exercises to evaluate the quality of our customer service. Numerous team members were commended including one described as 'a born saleswoman who is really personable and has outstanding knowledge of her property list. She recorded every detail required and got top scores across the board'.

Two of our branches, Ealing and Chiswick, feature in the 2018 Best Estate Agent guide. This guide is compiled by Rightmove and the Property Academy who research 25,000 estate and letting agency branches throughout the UK each year. They analyse data such as how many properties each branch is marketing and how long it takes for a branch to sell or let each one. They evaluate the quality of photography and descriptions, and the number of hits each branch's properties receive on Rightmove. They assess the speed with which each branch responds to leads and the care taken in making contact with applicants showing interest. Finally, they carry out 50,000 mystery shopper exercises to test the quality of each branch's personal service. It's incredibly thorough! To feature in the Best Estate Agent Guide, each branch needs to have achieved results from these tests that put them in the top 30% of the 25,000 UK agencies.

Furthermore we were shortlisted for two national gongs at The Negotiator Awards 2018. 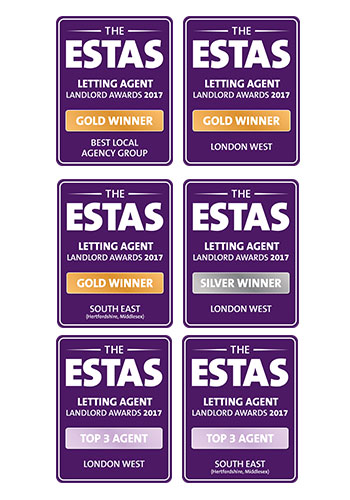 The 14th annual ESTAS ceremony took place the Grosvenor House Hotel London on 12th May 2017. The ESTAS aim to highlight great service in the residential property sector. The ESTAS awards are given to agents based on reviews from landlords and sellers.

We are tremendously proud of these awards, particularly because it is our own landlords and sellers who have voted our customer service as being market-leading in our county, our region and the country as a whole. 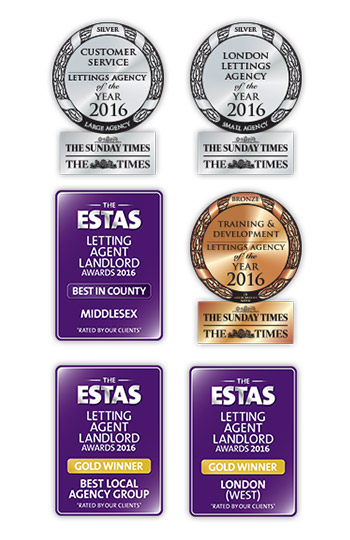 On June 10th Thorgills attended the Times and Sunday Time Lettings Agency of the year awards at the Lancaster London Hotel. With bated breath at the thought of yet more awards success, fingers were crossed, black cats were avoided and every penny spotted was quickly snatched up.

Joined by the crème de la crème of the agency world, competition was fierce with some of the industry’s most well-known and respected agencies competing for top spot in a host of specialist fields, as well as being crowned top agent in their geographical area.

In 2015 Thorgills collected awards in both the Marketing and Training & Development categories, two areas that the organisation focuses on heavily, ensuring best practice coupled with ground breaking and exciting methods are used at all times.

So far 2016 had proved to be a success; Thorgills Brentford branch was approaching its first anniversary and was already the market leader for the town, Thorgills Hammersmith was now open and making a significant impact, and at the ESTAS Thorgills picked up no less than three accolades, including best local agency group in the UK.

Six months in to 2016 and Thorgills have already collected six industry accolades, this coupled with the results driven approach to exceptional service is helping to ensure that Thorgills continue to develop as a market leader. 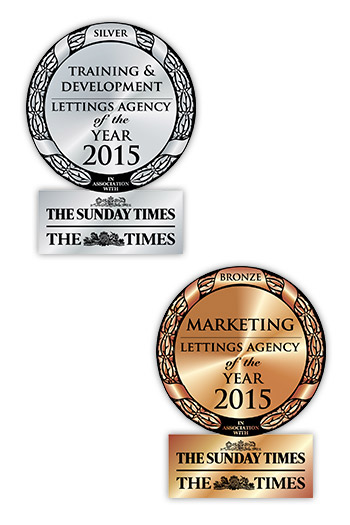 Silver award in the Training & Development category and Bronze in the Marketing category.

On Friday 12th June, over 550 leading letting agents from throughout the UK attended a glittering ceremony at The Lancaster London Hotel opposite Hyde Park where the winners of the most highly regarded awards in the lettings industry were revealed. The winners were presented with their awards by six-time world champion and marathon ace, Paula Radcliffe MBE, with renowned journalist, author and newsreader Penny Smith acting as compere.

Award winners were decided following a rigorous and thorough judging process by a panel of 20 industry experts who assessed initial entry submissions before conducting an extensive review of the entrants, which included over 150 hours of telephone interviews and independent mystery shopping exercises. The whole of the judging process was overseen by The Property Ombudsman, Christopher Hamer, and David Cox, Managing Director designate of ARLA acted as Arbiter.

Now in its sixth year as a dedicated competition, these awards have become widely recognised as the most prestigious and difficult to win. With more entrants than ever before, over 5,000 offices were represented this year, but only the very best of the best were crowned as winners.

Ben Madden, Managing Director of Thorgills said “To be recognised in two such competitive categories is a real testament to the team at Thorgills’ commitment to personal development. We strive to push everyone to the best of their ability, but this wouldn’t be possible without complete commitment from all team members. Our ability as marketers has always been an area we are particularly proud of, our exceptional growth over the last seven years wouldn’t have been possible without presenting and driving quality enquiries towards our client’s properties.” 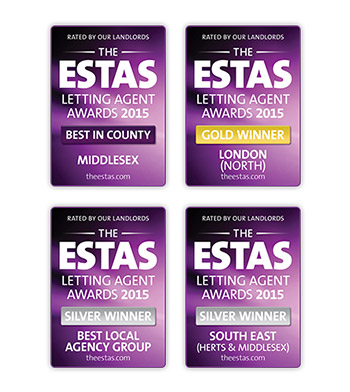 Thorgills wins four awards at The ESTAS, the most prestigious estate & letting agent awards in the UK sponsored by Zoopla Property Group

The West London based agency received the awards in the London North, Middlesex and National categories.

Simon Brown, MD of the ESTAS said “The ESTAS are special because shortlisted and winning firms are selected purely on the service they deliver to their clients. In fact just taking part shows an agent’s commitment to their customers and to be shortlisted is a great achievement in itself.  For the winners this is the highest accolade they can receive in the industry.”

Ben Madden, Managing Director of Thorgills commented “After such great success in 2014 we knew we had put ourselves on a pedestal, but the team decided once again that we were ready to prove our service levels are up there with the best in the business. Picking up awards in the London North, South East, Middlesex and National Categories in my mind confirms we are able to offer great service, but also that added level of consistency that can often be missed with larger organisations.” 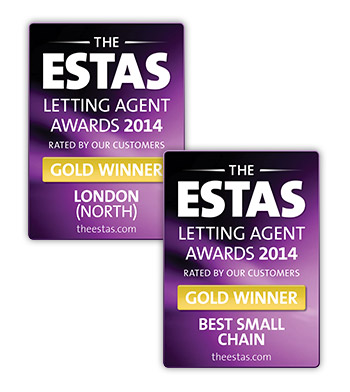 This year we are delighted to have received the Gold Awards in both the London (North) category and the National small chain category at the prestigious Estate & Letting Agent Awards 2014.

The award was announced by Phil Spencer, the TV property expert at a lavish luncheon & ceremony at the Hilton Park Lane London attended by 700 of the UK’s top estate and letting agents.

The awards, celebrating their 11th year are known throughout the industry as the ESTAS. The ESTAS determines the best agents in the country through research carried out amongst customers who are asked a series of questions about the service they have received from their agent. 32,000 questionnaires were completed by customers during the competition.

Ben Madden, Managing Director of Thorgills said “We are absolutely thrilled to be recognised at this year’s ESTAS. It means so much to us as we know it’s our customers who have judged our performance. We take our levels of customer service very seriously because we know clients have a choice. We have always been very proud of the personal service we provide and this is great way to demonstrate how good we really are. The challenge now is to maintain these great service levels and improve upon them wherever possible, and this is something we will embrace whole heartedly.”