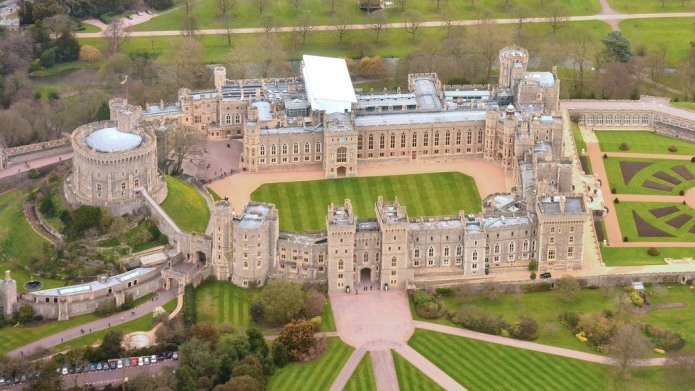 Given the vast wealth of the Royal Family, it certainly shouldn’t come as a surprise to hear that Queen Elizabeth II’s property portfolio spreads the width and breadth of the British Isles. The figures released by the Crown Estate last year paint a picture of a stunning collection of property.

At present, the estate is valued at an astonishing £13.1 billion. However, this portfolio is divided into two parts: properties owned by the Queen herself, and properties which fall under the control of the Crown Estate. Those properties in the second category cannot simply be sold at will, and the Queen does not receive revenue from them.

Still, the scale of the Crown Estate is remarkable, including 7,936 plots of land across 271 of the 342 districts of England and Wales. The properties themselves are similarly impressive, ranging from grand hotels to historic castles and luxurious palaces.

Inherited from the Queen’s father and located in Norfolk, Sandringham House is a 20,000-acre estate which passed to her when George VI died in 1952. It’s typically where the Queen spends her winters and was the setting for her first televised Christmas message.

The house and much of its grounds were purchased for the royal family in 1862, and almost completely rebuilt by the end of the nineteenth century. It is now a Grade-II* Listed building, and forms part of the portfolio privately owned by the Queen.

Palaces
The Crown owns several palaces across London, including, unsurprisingly, Buckingham Palace, Clarence House and St. James’ Palace, all of which are maintained by the Royal Household Property Section.

Buckingham Palace is the Queen’s primary London residence, and is often host to state occasions and royal hospitality events. It features 775 rooms and the largest private garden in London, and is partially opened to the public in August and September.

St James’ Palace has been owned by the royal family since the Tudor period and is the meeting-place of the Accession Council, who formally proclaim the new monarch after the death of the king or queen.

Clarence House is attached to St James’ Palace, and is the official residence of Prince Charles and his wife Camilla. The house was built by the Duke of Clarence – who later became King William IV – because he found St James’ Palace to be too cramped.

No monarch’s property portfolio is complete without at least a couple of castles, and the Crown Estate owns several.

Balmoral Castle in Aberdeenshire has been a royal residence since it was purchased by Prince Albert, the husband of Queen Victoria, in 1852. Today, the 20,000-hectare estate is where the Queen and Prince Philip spend the majority of their summer. Like Sandringham House, Balmoral is among those properties privately owned by the Queen and not by the Crown Estate.

Windsor Castle is among the oldest properties owned by the Crown Estate, and is the longest-occupied palace in Europe. Originally built in the late eleventh century by William the Conqueror to protect the Norman occupation of London, the castle has been expanded and remodelled on numerous occasions throughout its rich history.

It is often used as the Queen’s weekend home, and around 500 people live and work on the site – making it the largest inhabited castle in the world. Windsor Castle is also a popular tourist attraction, with around a million visitors each year.

The Crown Estate also owns a number of smaller castles, including Lancaster Castle in Lancashire, Pickering Castle in Yorkshire and Hillsborough Castle in Northern Ireland, to name but a few.

Beyond this, the Crown Estate also own various other property across Great Britain. These include Ascot Racecourse in Berkshire – the course which hosts the world-famous Gold Cup - the entirety of Regent Street and St. James’ Market in London, and around 263,000 acres of farmland.

If you’re interested in starting or adding to a portfolio of your own, you can view our properties for sale here, but you’ve got a long way to go before it rivals the Queen’s!