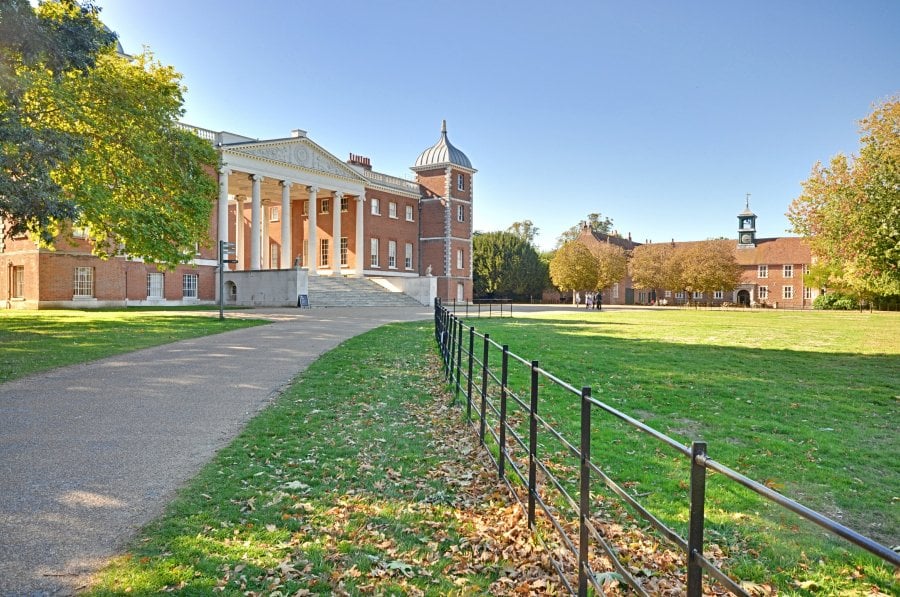 Set inside vast grounds made up of gardens, park and farmland, Osterley House is one of the last surviving country estates on the outskirts of London.

The original manor house was completed in 1576 for the banker Sir Thomas Gresham – who gives his name to nearby Gresham Road and also owned Boston Manor – and as a result of his wealth and connections the estate hosted several prestigious guests including Queen Elizabeth I.

Despite the high profile of its original owner, the house fell into disrepair until the middle of the eighteenth century, when a mortgage default brought the property into the ownership of another banking family, the Childs.

In 1761, Francis and Robert Child employed Robert Adam – who at the time was one of the country’s most fashionable architects – to remodel the house. Adam’s neo-classical design of the house is roughly square, with a turret each corner, and made of red brick with white stone detailing. One side of the house is left partly open and features twelve columns and a huge ionic pediment which screen the central courtyard. Inside the building, the rooms are characterised by ornate plasterwork and are considered unusual among English homes of the same era due to the degree of co-ordination between their décor and furnishings.

Francis Child did not live to see the property completed, and Robert died nineteen years later in 1782. Robert’s will left all of his holdings in trust to be inherited by his eldest grandchild, as he did not approve of his only daughter’s husband John Fane. Robert’s eldest granddaughter, Lady Sarah Sophia Fane, inherited the house and married George Child-Villiers, Earl of Jersey – after whose family Isleworth’s Jersey Road and Villiers Road are named.


The Earls of Jersey owned Osterley throughout the nineteenth century, but in the twentieth century did not often spend time there. In 1939, Earl George Child-Villiers opened the house to the public for the first time after receiving numerous requests to see its interior. Around 12,000 people visited during the first month of the house’s opening.

Shortly afterwards, the Second World War began and the Earl permitted the Local Defence Volunteers to train on Osterley’s grounds. In 1940, the first Home Guard training school was established within the park, run by veterans of the Spanish Civil War who taught hand-to-hand combat, camouflage techniques, and the art of making explosives. However, Winston Churchill and the War Office disapproved of the school – possibly because of the political leanings of its leaders – and it was shut down in 1941.

After the war, the Earl decided to give the house and its grounds to the National Trust and moved to Jersey in 1947. Much of the house’s furniture was sold to the Victoria & Albert Museum, who also helped to restore the house to its present state alongside the Earl and the Ministry of Works. Today, the park attracts around 350,000 visitors each year.

The house regularly hosts exhibitions – in 2020 it has been host to an exhibition about Judith Kerr’s children’s classic The Tiger Who Came to Tea, a collection of treasures acquired by the Child family, and Kick Off, a collaborative women’s football art project exploring the role of women in society – as well as a Parkrun and numerous events during half terms and school holidays.

Since the Child-Villiers family moved out, Osterley has been used frequently as a filming location, featuring in The Grass is Greener, The Young Victoria and most recently The Dark Knight Rises, as well as various episodes of ChuckleVision and Horrible Histories.

If you would like to live near this picturesque neo-classical National Trust house and its vast acres of beautiful parkland, you can contact our sales team here and our lettings team here.