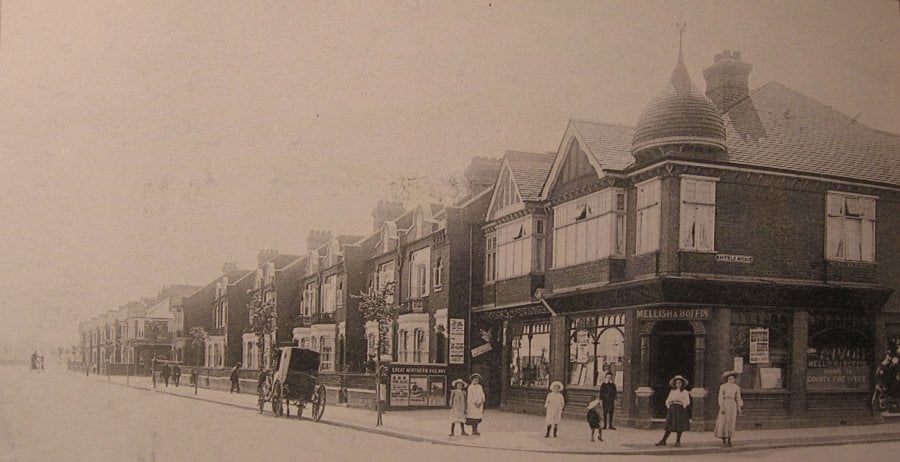 Northfields' shopping parade, Northfield Avenue, was once less glamorously called Northfield Lane, and then even the name Lane was a bit optimistic! It was a muddy track between the small villages of Little Ealing and Ealing Dean, which became what we now know as West Ealing. Historically the only local settlement in the Northfields area was a few houses near The Plough Inn, which has been serving beer to local people since 1722!

Opposite The Plough, on the outside of the bend into Little Ealing Lane, there are large wrought iron gates to Ealing Park House, a large property dating back to 1693 and substantially remodelled in the late 1700s. It was home to a succession of prosperous dignitaries, such as the Earl of Warwick, and Queen Victoria once visited the house to see its beautiful flower gardens, lakes and resident bird collections. The building became a convent and later a school run by nuns, and the gardens were developed into the streets of houses between Ealing Park Gardens and Darwin Road. Until recently Ealing Park House was a school owned by the Saudi Arabian government, and following an extensive restoration and extension programme it was formally opened by the Bishop of London last month as the new home of Ealing Fields High School, part of the Twyford Church of England Academies Trust.

Throughout the 1900s, the majority of Northfields changed from open arable farmland to fields of market orchards, owned by the Steel family. They despatched their harvests from a fruit packing warehouse on Northcroft Road, a Grade II listed building recently converted into characterful apartments. At the turn of the 20th century, with the advent of improved rail connections at Ealing Broadway, and with the arrival of the tram along Uxbridge Road in 1901, the Steel family wisely decided to develop their orchard land into much-needed family housing for city workers. Hessel, Bramley, Wellington, and Julien Roads are all named after varieties of apple and pear, paying homage to the former use of the ground the houses were built on.

Charles Blondin, a world famous tightrope artist, was one of Northfields' most notable residents. In the late 1800s he lived in a large house on the northwest corner of Windmill Road and Northfield Avenue. One of his greatest achievements was when he crossed Niagara Falls on a tightrope (he even fried an egg in a pan and took his manager across on his back, each while teetering hundreds of metres above millions of gallons of falling water!). We have Mr Blondin and his brave Niagara stunt to thank for the names of Blondin Avenue, Niagara Avenue and, of course, Blondin Park.

Lammas Park was once used as grazing land for local cattle and became a public park in 1883. It was once home to fifty flower beds, two bowling greens, three cricket pitches, nineteen tennis courts and four croquet lawns, as well as a bandstand, glasshouses and a tea chalet!

Trains first stopped at Northfields Underground station in 1883, although the current building, designed like many other stations by the architect Charles Holden, opened in 1932. The station was Grade II listed in May 1994 because of its important 1930s features like the tall clerestory windows and the interesting construction of its concrete ceiling - look up next time you walk through the station! There is a large Underground depot to the west of Northfields station, so depending on the timing of your journey, you may find yourself the first person on the train or alternatively you may have to squeeze in amongst the suitcase-wielding travellers shuttling to and from Heathrow!

A fascinating Northfields landmark is the building formerly known as the Spanish cinema, just south of the Underground station. It opened as the Avenue Theatre in 1932 with a pre-film performance involving an acrobatic dance troupe and a huge organ. The inside and outside of the theatre was richly decorated in a Moorish Spanish style, which earnt it the nickname of the Spanish cinema in the days when Ealing had many cinemas to distinguish between. The venue was reborn as the Odeon and Coronet, but unfortunately closed as a cinema in 1985. Rather aptly, its final showing was The Terminator. Applications to convert the building into a supermarket and a bingo hall were refused in favour of it becoming a relatively short-lived nightclub. Now, as an Elim Pentecostal Church, it is a Grade II* listed building being slowly and carefully renovated to restore its splendid original features.

If you are thinking of moving to Northfields, there are scores of very well cherished late Victorian and Edwardian terraced family homes and maisonettes to choose from, many with pretty period details. Local primary schools are over-subscribed and the independent retailers of Northfield Avenue, such as the Thai cafe Nuki's, the two Mooch gift shops and the Owl and the Pussycat micro-brewery, not only provide locals with essentials but also foster a unique sense of community spirit. All that said, Northfields is the area of Ealing with the highest average income, so it's no surprise that sales and lettings prices in the area are high; take a look at our sales and lettings pages to plan your move to Northfields or simply dream of it!