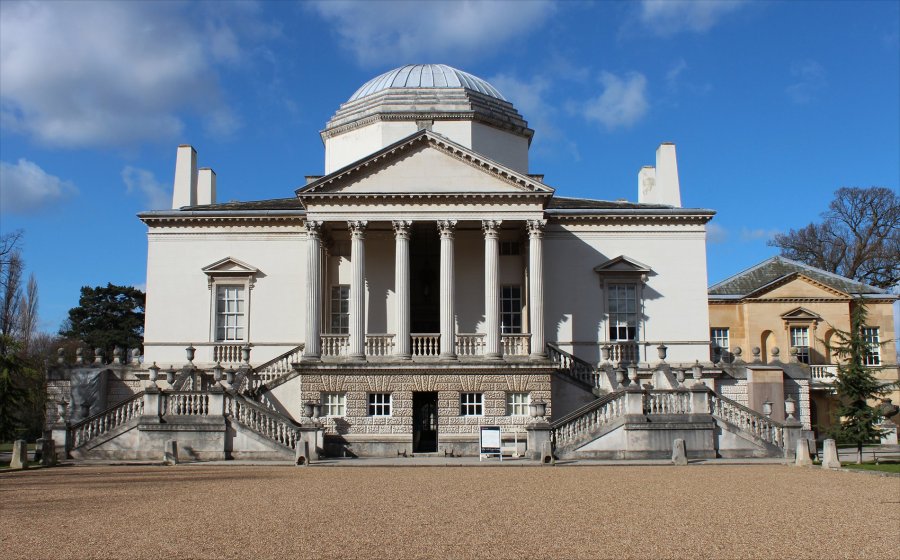 The beautiful Palladian villa which numbers among West London’s favourite tourist attractions was not the first property to be located on the current site of Chiswick House and Gardens. The original building was a huge Jacobean house, completed in 1610, used as a summer retreat by a series of wealthy owners.

This first Chiswick House formed the southern end of the Royalist lines in the Battle of Turnham Green in 1641 at the beginning of the English Civil War, but survived unscathed, only to be badly damaged by a fire almost a hundred years later, in 1725.

At this time the owner, Richard Boyle – also known by his title Lord Burlington – decided to use the fire as an opportunity to build a new villa, choosing a site slightly to the west of the old house. Burlington designed the house himself, with the aid of William Kent, and drew inspiration from the classical architecture he saw on his travels to Italy earlier in his life.

The house was designed in an attempt to recreate a Roman villa, and sports Roman features including an octagonal dome, a portico with columns capped with Corinthian-style capitals, and classical statues.

The gardens, too, were inspired by sites seen on Burlington’s travels, especially the gardens of Emperor Hadrian’s Villa Adriana at Tivoli. Highlights of the gardens visible today include the deer house, an Ionic temple, the obelisk, William Kent’s cascade water feature, and a gateway designed by Inigo Jones. The gardens also incorporate a cricket ground, and a café.

After Burlington’s death, the house passed to his daughter Charlotte, who had married William Cavendish. The Cavendish family were prominent Whigs and many politicians visited or stayed at Chiswick House in the late eighteenth and early nineteenth centuries. The Enlightenment philosophers Voltaire and Rousseau, as well as future US Presidents John Adams, Thomas Jefferson and Benjamin Franklin, Prime Minister William Gladstone, Italian statesman Giuseppe Garibaldi and Queen Victoria are also known to have visited the house throughout its history.

In the second half of the nineteenth century, the villa was rented out to a succession of prominent tenants, including the Duchess of Sutherland, the Marquess of Bute and even the Prince of Wales. In 1892, the site was rented to Doctors Thomas Seymour and Charles Molesworth Tuke, who used the villa as a mental hospital for wealthy patients.

After 1929, the house was sold to Middlesex Country Council, and has remained in public service ever since. It served as a fire station during the Second World War, during which it was damaged repeatedly by the vibrations of the Blitz and was hit by a V-2 rocket in September 1944.

Since 2005, Chiswick House and Gardens has been managed by English Heritage and Hounslow Council. Two years later, a Heritage Lottery Fund Grant was used alongside approximately £4 million of fundraising to begin a restoration project of the gardens, which has now been completed. Today, the gardens are open from dawn until dusk without charge, while entry to the house is £7.80 for adults and free for under-18s. The gardens also host a number of activities - later this month they'll ost a Book Festival, Open House weekend and even a dog show! You can find out more about their events here.

The neighbourhood around Chiswick House and its grounds is highly desirable, and its residents are proud of their proximity to this impressive villa. The area features mostly grand Edwardian houses as well as some newer apartments close to the river. Burlington Lane, which passes Chiswick House as it connects the Hogarth Roundabout with Chiswick Mainline station, takes its name from the house’s designer, while nearby Cavendish Primary School is named after the family who lived at the house from 1758 to 1862.

If you are interested in living near this spectacular Grade-I Listed house and its beautiful grounds, contact our sales team here or our lettings team here.