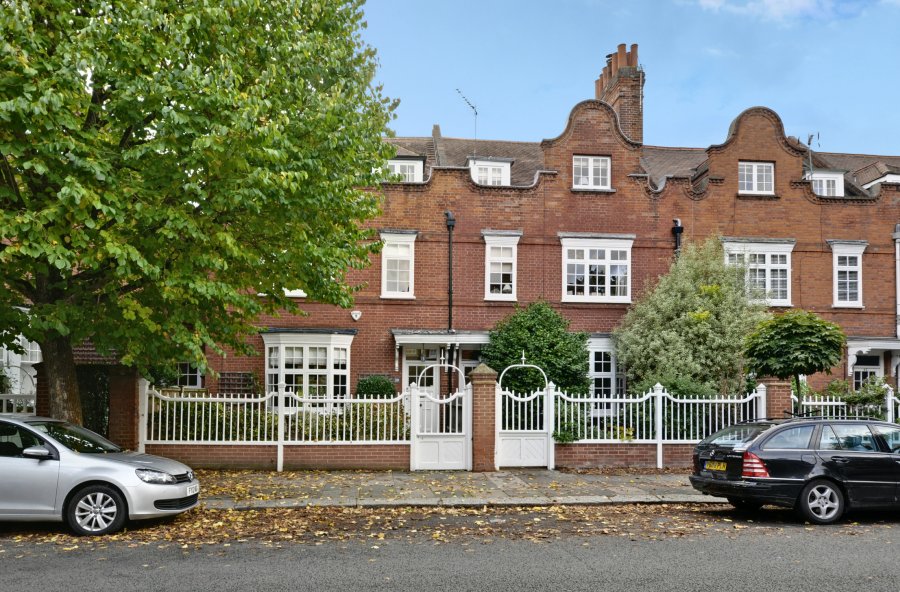 Located just to the north of our Chiswick branch on Turnham Green Terrace, Bedford Park is one of the most popular neighbourhoods we sell and let properties in.

Bedford Park is often thought of as the world’s first “garden suburb”. Its development created a model which has shaped other suburban areas both in West London – such as the Brentham Garden Suburb – and across the world. The Garden City method of urban planning, which led to the development of Letchworth and Welwyn in Hertfordshire, was also influenced by the model set by Bedford Park.

Bedford Park’s history began in in 1875, when a cloth merchant named Jonathan T Carr bought a plot of 24 acres of land near the then newly-constructed Turnham Green Station.

Carr employed Edward William Godwin, a proponent of the Aesthetic Movement, as his architect for the project but his plans were slated by other professionals and the two quickly parted company. In Godwin’s place, Carr instead hired Richard Norman Shaw, one of the leading architects of the time.

Norman Shaw favoured the Queen Anne style, and the properties he designed in Bedford Park are among the finest examples of this architecture in the country. Many of the houses in the area are now Grade-II Listed on account of this, and feature the fine brickwork, oriel windows, broad porches, smart sash windows, stone quoins and decorative pediments associated with this style.

In its early years, Bedford Park was a highly fashionable neighbourhood, hosting a school of art, club, pub and the pretty church of St Michael and All Angels. Notable residents at the end of the nineteenth century included the poet WB Yeats, the playwright Arthur Wing Pinero, painter Camille Pissarro and the actors William Terriss and Florence Farr.


However, in the twentieth century the area lost some of its status. Many of the houses were occupied by multiple families and the name Bedford Park became associated with poverty.

In 1963, in response to Acton Council’s demolition of The Bramptons, local residents Harry Taylor and Tom Greeves founded the Bedford Park Society to reverse the decline of the neighbourhood. To begin with, the society’s purpose was to resist further demolition plans and to protect the architectural quality of the area by discouraging its members from making unsuitable improvements to their homes.

As a result, today Bedford Park has regained much of its former glory. Its unique architecture has been protected and its tree-lined streets are once again home to a community of artists, architects and other creatives.

If you would like to join them, you can contact our sales team here and our lettings team here.