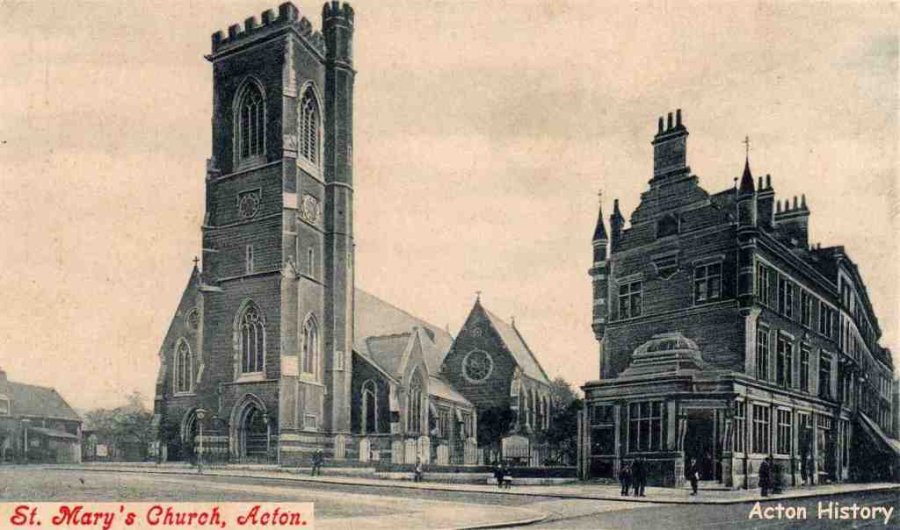 Acton’s name derives from the Old English words ac and tun, which combine to mean “oak farm”, hinting at the town’s history as a small rural village.

Settlement in the area dates as far back as the Palaeolithic period. Burial sites from the Neolithic era and the Bronze Age have been uncovered in Mill Hill Park, along with finds of Iron Age coins close to Bollo Lane.

Throughout the Middle Ages, Acton was made up of two separate hamlets, known as Church Acton and East Acton. Both were popular resting spots for travellers heading into and out of London. As the settlements lay on the road between London and Oxford – now known as the Uxbridge Road – many people passed through the area, and both hamlets hosted numerous inns to service them.

Despite this, Acton remained sparsely populated until fairly recently. According to census data from the middle of the 18th century, Acton had only 160 families resident.

Like many other parts of West London, Acton was incorporated into London as the capital expanded in the nineteenth century, becoming an urban district in 1894.

In the nineteenth century, much of Acton’s population was employed in the laundry industry, earning the settlement the nickname “Soapsud Island”. The town’s soft water sources enabled over 600 laundries to open in South Acton alone, serving the hotels and rich homeowners of the West End.

At this time, Acton was noted as a deprived area. The town’s housing was described by city officials as “beneath mediocrity of character”, and taxes in the area had to be raised to cope with the growing number of dependent poor in the parish.

The Worshipful Company of Goldsmiths built twenty alms-houses to help house poor retired workers. These now survive as smartly-restored Grade II* listed cottages on East Churchfield Road, and are considered among the most architecturally beautiful buildings in the capital by English Heritage.

The twentieth century saw an end to the laundry industry as washing machines became commonplace household items. Acton instead became an industrial centre, particularly in the motor vehicle sector.

The town has also experienced major redevelopment, and now hosts a number of attractive developments. Many of these bear the names of the industrialists who helped bring employment to Acton Vale: including Napier House on Bromyard Avenue, Bronnley Court on The Vale, and several of the buildings in Factory Quarter on Larden Road.

As it was in the Middle Ages, Acton is still an excellent springboard for travellers heading into Central London. Along with Harrow, the town has its name in more train stations than any other location in the UK, with seven – Acton Central, Acton Main Line, Acton Town, East Acton, North Acton, South Acton and West Acton – and will join the Crossrail network once it is completed. This, along with its redevelopment, has cemented the area’s popularity with commuters.